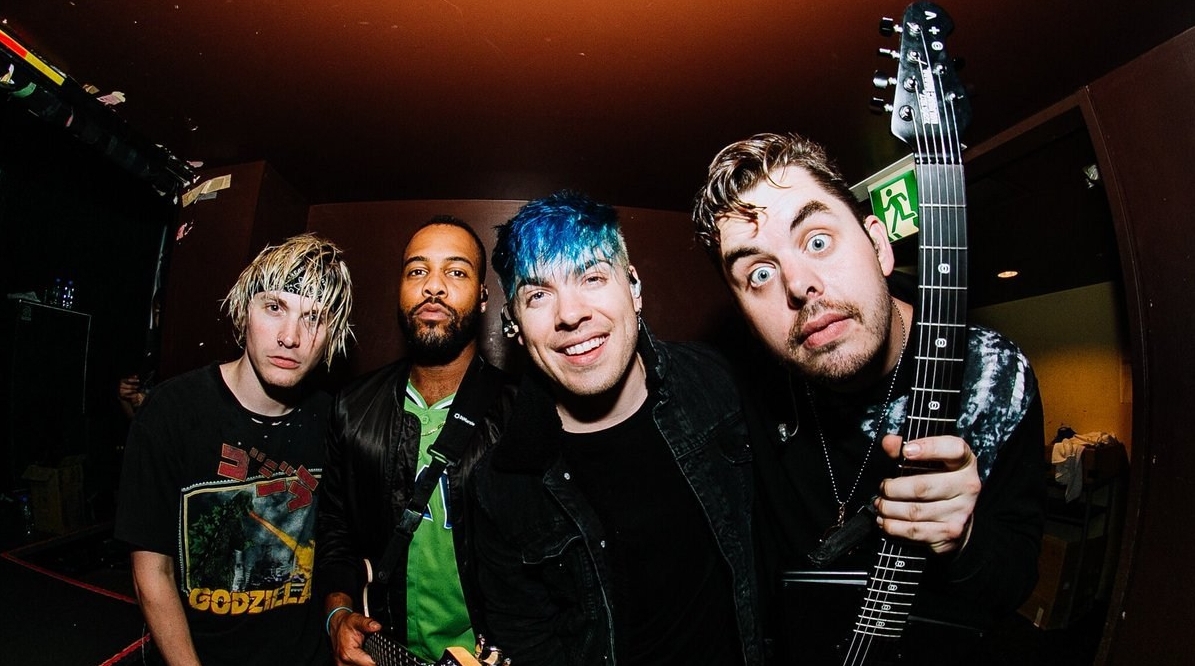 Actually on tour to introduce their new album Midnight, Set If Off is spreading their positivity through the USA. Europe you better be ready because you’re their next victim.

Now, let us telling you why you should buy this record and come party with them (one of this reason? We’re inviting you to see them in Paris):

Most of the time describing a band with one word isn’t that easy but when we talk about Set It Off, « feel-good » is definitely the answer. We all agree on that one. Thanks to the rhythm, the lyrics or just the way they behave, these cool guys know how to make us smile and forget about our problems. Music at its best!

They will rock you

Life’s too short to be dancing with the Devil but definitely not to dance to their songs. With Set It Off how could you resist? They already have great hits like Why Worry, Uncontainable, Forever Stuck In Your Youth or our little favorite The Haunting and it’s totally impossible to listen to these songs without doing your little lonely dance.

Such as bands like Waterparks or I DONT KNOW HOW BUT THEY FOUND ME, Set It Off just creates songs out of the box. Even if they’re clearly Rock, don’t label them. They are not afraid to use elements from Pop and also Classical music using trumpets and clarinets. Sometimes they even rap. Classic rock bands knew it, if you want to be experimental and enjoy what you’re doing, you have to cross the boundaries.

They experience things and have fun creating a sound that makes their hearts beat as they sing in Different Songs. Fortune favors the bold: Cody, Dan, Zach and Maxx had already reached more than 2 million streams in 5 days on Spotify.

The new baby is here and it’s a pretty one. Say hello to « Midnight »

This new album looks like a kind of compromise between the different areas. With Midnight, Set It Off goes back to their roots with an aggressive rock sound and strong drums, guitars and lyrics. At the same time, the band succeeds in keeping the Pop dancing energy. This happy-sad record just like Set If Off, has no rules.

Chic, rock, dark… The new blue aesthetic is something. Shelby Parks and the band worked hard on the style of their new era. The colors and the design, in the music videos, photographs but also in the merch, are really pretty and smart. Pay attention to every little detail because it could mean something important. Hey this is Art!

With a voice that reminds us of Bruno Mars or Adam Levine and influences such as Jason Derulo, it’s pretty hard to resist to Cody’s voice. The singer did some really great and funny covers on his Youtube channel. Check it out.

In this house we love a good rhythm section. With his really powerful and quick drum skills, is it even surprising to find Maxx Danziger in our list of favorite drummers? We don’t know where he finds all this energy but it’s pretty impressive. But Maxx, what are they feeding you?

Can we expect a drum solo on the European tour? Not sure, but we definitely want this to happen (what about a cover of Baby Shark?).

Lonely Dance isn’t just a great song, it also has an amazing music video with some Alien vibes. Sigourney Weaver is shaking.

Shall we say a « family »? On Twitter, Intagram or Twitch, Set It Off is here to answer your questions and keep you inform about their projects. They’re also perpetually creating exclusive contents for the fans on social media.

A gifted band is great but a gifted cool band is even better. Cody, Dan, Zach and Maxx are quite like the new friends of your squad thanks to their really funny videos on Youtube.

We have @SetItOff covering the @blink182 classic ‘Feeling This’!

Feeling that? Pre-order your own copy of Rock Sound which comes with the ‘Worship And Tributes: Volume II’ album now, worldwide from https://t.co/5GNfemKQnj pic.twitter.com/qbx6T0imyK

And it’s the hit Feeling This! This one will be on an exclusive CD by Rock Sound with some other great covers by Sleeping With Sirens, As It Is, Deaf Havana, The Faim and Waterparks.

The band surprised everyone last year including Everybody to their hit N.M.E. It wasn’t only about the song but also the dance and of course we want it that way.

They ask for dogs on tour and one of them is even the star of their latest music video. A band loving animals is always a band who deserves love and support (and our money so that’s why you can order Set It Off’s new album “midnight” and get tickets and vip to the midnight world tour at http://setitoffband.com.)

A cat, the 5th member of the band?

Okay here we are speaking about animals again but we can’t forget Queen Pistol. This little alien is Maxx Danziger’s cat and she already has her own fans on social media. Trust us.

Of course she can’t be touring with him but well, artists always find creative ways to resolve their problems: her lovely face has been painted on his drums so she can now follow him everywhere. « Awww! »

And are the boys gonna have their revenge? Netflix, you’ve something to do with those guys. We warned you.

They’re coming back to Europe

After 3 years, they’re finally back in France for a show @ Le Backstage BTM in April. Buy your ticket right here.

And because we have a ticket for you!

Above the Noise partnered with Set It Off for this show so we have an extra ticket just for you.