Here’s our 2nd interview from the Longlive Rockfest in Lyon and not the least: Pierce the Veil ! Let’s meet the legend Vic Fuentes, king for so many days now and talk about the last album, touring and his own misadventures!

Hey Vic! Can you tell us how the Pierce the Veil’s adventure began?

Well, so my brother Mike, the drummer, and I had another band. They broke up so we wanted to do new music. We recorded an album together that was the first Pierce the Veil’s album. We needed a band so we found Tony and Jaime who played in a little band together. We just decided to join forces to make one band and we started touring. That was pretty much the beginning. Since then, we just keep making albums and touring and this is awesome.

Isn’t it too hard sometimes to be in the same band as his brother?

No, I think it’s easier because we grew up together and we understand each other more. You know, I think in a lot of ways we have a higher understanding than most people would. Our brain is kinda think alike.

KING FOR A DAY

Today it’s the Longlive Rockfest and you are with Sleeping with Sirens. Maybe you’re gonna play King for a Day…

Come on Vic, you can’t laugh at it (laugh)…Sensitive topic. But can you speak about this collaboration? How did it happen?

It was actually brought together by the fans. They kept tweeting us to do a song together. We actually didn’t know each other and everyday it was like « Do something with Kellin Quinn » (imitating a fangirl) and I was like « Who is Kellin Quinn ? ». So I contacted him and I told him I had a song called King for a Day and that I think he’d be perfect for collaboration. He wanted to do it and it kinda worked out. I think it was just the perfect timing for both of us.

So you met each other thanks to the fans…

Yeah, they brought us together.

I heard you wrote Circles after the Paris attacks. Why did you write a song about it and it hit you so much ?

I think it hit me so much ’cause we’ve played there before. We know Paris, we know that venue and as a band, a tragedy happening like that, at a show, with so many people who lost their lives, it’s so close to us. It really affected me. I was really sad for the people and for just the all situation all around. It was really heartbreaking. I usually sing about things giving really deep emotions, really happy or really sad. So I just wanted to write something for Paris after that.

I think for that song it was hard to convey the message which is overall about friendship and the one thing that hit me the much about the all that thing was a lot of people died trying to help their friends and that’s about the song: helping your friends, helping each other in bad situations and that was like the main goal of the video, how can we convey that without getting too dark or too literal with the situation. I wanna bring something positive at the end of it.

And is it because of this song that you called your album “Misadventures”?

No, it’s more because all the process was a big misadventure, making this album was a misadventure actually. It is something we settled to do in a short time.  We ended up writing it all around the world, in different studios, different countries, tours, cities…I ended up taking a final trip to finish the lyrics. I flew myself up to Seattle, my favorite city, and I lived here for like two weeks and finished all the lyrics. So all that adventure seems like something I’ve never expected but it was necessary to finish the album. It was just a big misadventure. (Laugh)

There’s another crazy video from this last album, Floral and Fading! What’s the story behind this funny video?

The first like idea was the invention of the mosh pit : when and where the first person pushed somebody and was like “This is fun”. That, was really the first idea and then we were like “why aren’t we reinvent like legendary rock’n’roll things like the lighter in the sky or the first crowd surf”? We just wanted to keep inventing these legendary rock’n’roll things for the video. That was the all concept. We just wanna stay in the sixties and the seventies and have a lot of with it.

And how was it to have short hair for the video?

(Laugh) It was awesome!

Do you already know the direction you’re gonna take for the next album?

No, I don’t think we already know until we sit down with the guitars and start messing around (Laugh).

Next is: we finish the tour in Europe and we come back home. The most exciting thing after is I think a big tour in America and Canada with Rise Against which is a band I wanted to tour with since I’m young so it’s a dream come true. Super excited for that.

It was really cool! I always love learning from people who are doing it forever. You know, you can always pick up something. They have like one of the best rock shows, they do rock’n’roll very well, Deryck is a very great frontman, so it was cool to see them doing things.

Fews days ago, you were at The french Download Festival, sharing the stage with Blink-182 and Linkin Park…

It was awesome! I really had a good time. I heard that this year was bigger than last year and it was super fun ! People had a good time, they went crazy…Mark Hoppus watched our set from the stage. He was like « Don’t fuck up! » (Laugh). It was an exciting day, really cool.

Do you plan to come back in France?

Not yet but we’re trying too. We’d love to come back at least maybe one more time before the next record. It would be nice. So, we’ll see.

The worst trick from your mates…

The weirdest present from a fan…

Not the weirdest but one of the coolest was a Tabasco bottle. Yeah, I do like Tabasco.

I think it’s whenever anyone on the bus has a family member or something happens to them back home. It’s always the worst.

The last bad joke you heard…

What did the olive say when it rolls off the table?… I leave! (laugh)

The weirdest pick up line ever…

Worst thing you ever eat…

A cultural misadventure in France?

One day in France, I made somebody really hungry because of the language barrier. I made a joke and she didn’t get it. She thought I was insulting her and I totally wasn’t! I was like « I’m so sorry…« .

No more misadventures for today, it’s almost show time. Do you have a message for your French fans?

I think french fans mean a really lot to us. I guess, they’re always on our minds when we play Circles. We will see them soon and thank for buying our records.

The pics of their concert in Lyon are online just HERE. 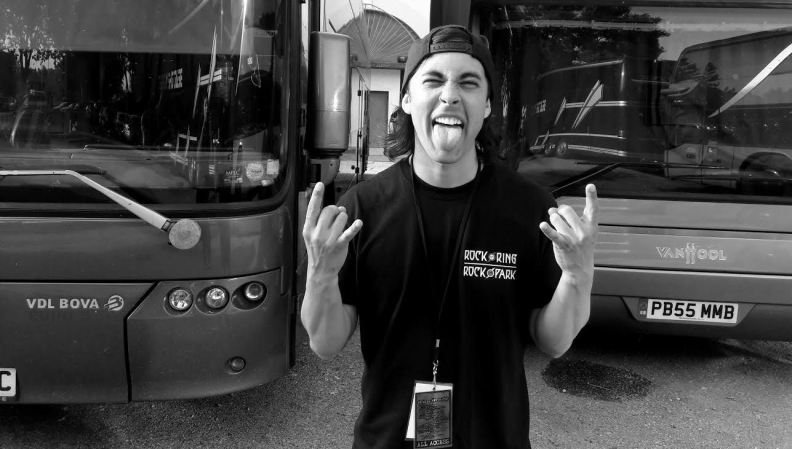